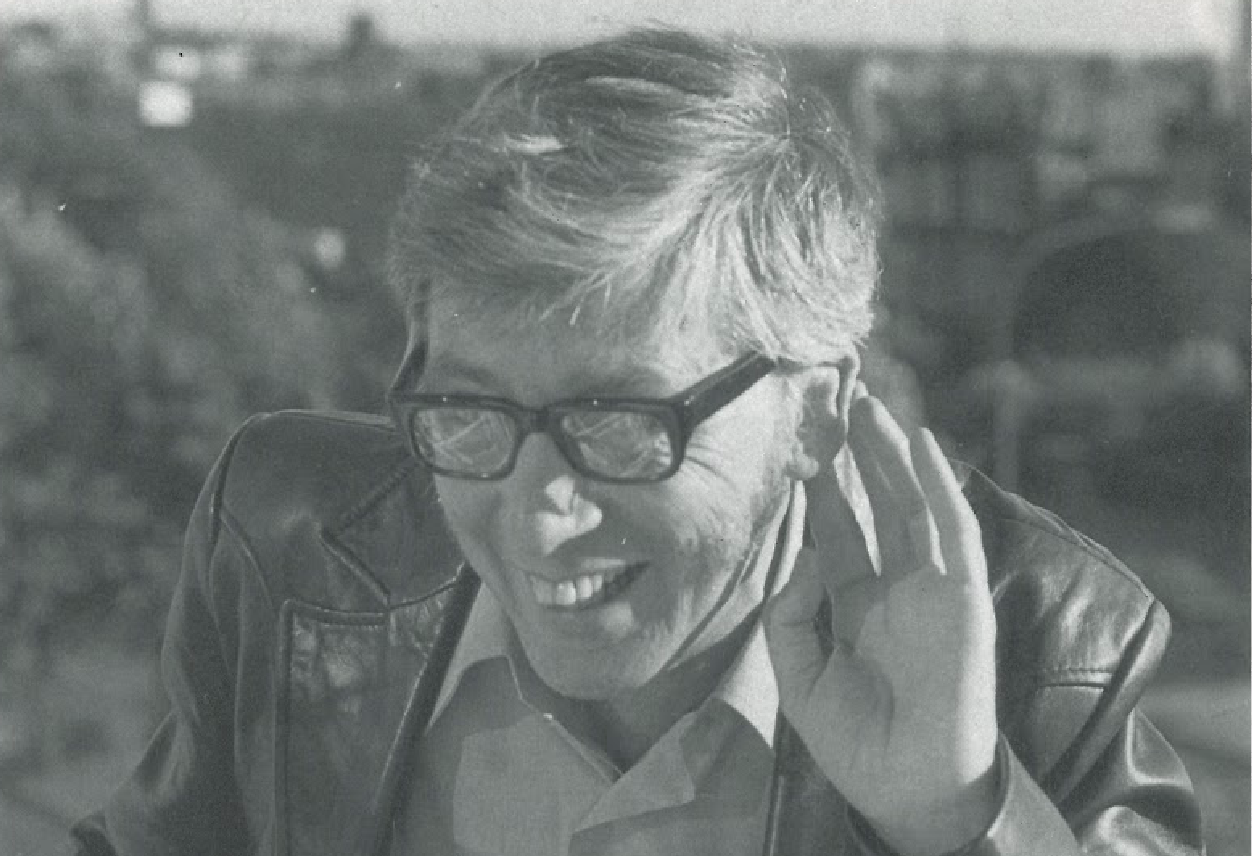 I first encountered Edwin Morgan in his role as one of my University Lecturers in the late 1970s. Subsequently, he became a fairly regular contributor to the literary magazine, Verse, which I edited with Robert Crawford, Henry Hart and — latterly — Richard Price. Later still, he became a warm supporter of my own work as a poet and we shared a mutual interest in and enthusiasm for prose poetry, longer form poetry and enjoyed conversations that ranged from growing up gay in Glasgow to stories of the Middle East.

During the final years of Eddie’s life I was a fairly regular visitor at the various care homes he stayed in. In 2007 I was visiting him in Clarence Court in the Broomhill area of Glasgow and asked if he would allow me to set up an annual poetry competition in his name. Initially, he was very hesitant and I put this down to the man’s natural modesty. But, after several weeks of reflection, he agreed, and the first Edwin Morgan poetry competition was scheduled for 2008. It was only after his death in 2010 that I came to understand that the real reason for his hesitation was, of course, his plans, laid out in his Will, for a much more substantial commemorative award. It was typical of Eddie’s generosity, however, that he didn’t say no to the first iteration of what would eventually become the Edwin Morgan Poetry Award.

Eddie planned his literary bequest with the support of Jim McGonigal, Hamish Whyte and Andy McBean and they asked me to join with them, initially as an executor of the poet’s Will, and then as a founding Trustee of what would become The Edwin Morgan Trust. These origins are important because they guided our thoughts and actions as Trustees during the first ten years of the Trust’s existence. Eddie was very clear in his Will that he wished to create an award for young people. He had multiple reasons for framing it in this way. First of all, he had struggled to get into print as a young poet and wanted to provide the kind of substantial opportunity that he had not had. Secondly, he had devoted his life to the education of — mainly — young people at the University of Glasgow and had carried that mission into secondary schools where he gave readings of his poetry on a regular basis. A famously ‘future-oriented’ poet with a deep interest in foreign cultures, space exploration and technological advancement, he believed that his society should invest in the generations that would follow his.

Our early discussions about the Trust took their direction from this knowledge. We set up a biennial poetry competition for poets under the age of thirty in order to respect the precise terms of Morgan’s Will. We also decided that the second strand of our activity would focus on the translation of poetry from foreign languages. Eddie’s Collected Translations is just about as voluminous as his own Collected Poems and it seemed right to acknoweledge the centrality of that enthusiasm by organising biennial translation exchanges which, to date, have brought poets from Slovakia, Portugal and Hungary into contact with their Scottish contemporaries.

During the first decade of the Trust we met as Trustees around three times a year, although there was much emailing to and fro as well. An enormous amount of work was undertaken by our first Chair, Jim McGonigal, who presided with warmth and efficiency over these convivial and interesting meetings. Another area of our activity that has required sympathetic vigilance has been that of giving permission to individuals and/or groups who wish to use Morgan’s work. Both Jim’s and Hamish’s knowledge of it is unrivalled and this made decisions much easier. We have always tried to take an open-minded approach to such requests while being mindful of Eddie’s standards of excellence. Andy McBean, who worked with Eddie as his accountant, was able to steer us carefully through the implications of the financial decisions we took to facilitate the Trust’s programmes.

After a number of years we were joined first by Robyn Marsack and then by Julie Johnstone as Trustees. Their knowledge and experience of the Scottish poetry scenes has been invaluable and their input was crucial in the run-up to the launch of the Trust’s  celebrations organised to mark what would have been Morgan’s 100th birthday. Louise Welsh joined us as a Trustee in the course of  2020 and helped us to reconfigure the year’s events in the face of the pandemic. Much of the success of the Centenary, however, must be credited to our programme manager, Siân McIntyre, who transformed the real into the virtual for us in ways that have enabled us to create a lasting archive as well as to generate new work in new forms.

Siân has also assisted the Trust skilfully through a process of change and expansion. We now find ourselves in a position to be able to look at widening the scope of our work beyond the biennial competition and translation workshops. While these will remain core areas of activity, we are keenly aware of the need to support Scottish arts communities more broadly and to be as inclusive as possible in the ways we attempt to recognise previously under-represented voices, both in terms of the awards we make and in the way we guide the work of the Trust. Morgan was about sonnets and concrete poetry, tradition and experiment, and the ways experiment could usefully challenge tradition. Our challenge as Trustees is to remain faithful to the complex, diverse, adventurous spirit of the poet who has made our work possible.

When I became Director of the Scottish Poetry Library in 2000, I expanded my professional connections with Edwin, whose work I had copy-edited for Carcanet Press, and had more informal contact, too.

One of my first actions was to arrange a co-publication with Mariscat for his 80th birthday, and a launch at the Kibble Palace in Glasgow. Subsequently the SPL was funded to purchase an archive of his printed work and ephemera; Eddie had his doubts about the material being lodged in Edinburgh, of course, but he had supported the SPL since its beginning and he knew that it was going to be well cared for by the librarians there.

I remember when he came with us to the Christmas panto Cinderella at the Tron, enthusiastically participating when the audience was asked to ‘swoon’ over Troon Colquhoun aka Buttons. With his friends Jim and Hamish I was asked to lunch at The Ubiquitous Chip after he’d received the Queen’s Gold Medal for Poetry, a very handsome object that he brought to show us; while republican to his backbone, he was discreet about his interview with the Queen. (The corgis’ presence in the palace corridor was mentioned in passing.)

I remember going to visit him in his room at Clarence Court, where he kept a Joan Eardley painting of Glasgow kids on the wall, and a collection of dictionaries, and the latest TLS would be lying on his desk. Sometimes I’d go with Liz Lochhead, and once with Michael Schmidt, his Manchester-based publisher. On that visit I asked him if he were to edit a Fyfield book (Carcanet’s series of past poets’ work), which poet would he choose? After only a moment’s hesitation he replied, ‘Blake!’

That’s the spirit in which I like to recall him: despite physical frailty in later years, what endured was his mental energy, curiosity, deep and knowledgeable love of poetry, kinship with those who stood at an angle to society, and fearlessness in creation.

I first met Edwin Morgan when I was compiling a bibliography of his work, then when I started Mariscat Press in 1982 we began to publish his poems (continuing to be his Scottish publisher till he died in 2010) – and during these processes we became friends.

In 2020 Happenstance Press published my memoir of those years, Morgan and Me. What follows is a condensed version of the Epilogue which concluded the book.

For Eddie’s centenary in 2020, the Edinburgh publisher Polygon brought out five ‘Morgan Twenties’, booklets each containing twenty poems and each on a different subject: love, Scotland, people, animals and science fiction/concrete poems; each introduced by a different writer.

I compiled these with the assistance of Robyn Marsack (whose original idea it was) and James McGonigal [he and I are EM’s literary executors]. To prepare the poems for publication I typed them out, ready to be sent to the typesetter. I know what it’s like to type my own poems – you can see things you hadn’t noticed before, they can look different on the page. Typing out someone else’s poems in bulk I experienced something similar but far more fascinating – and intimate: a glimpse into the other person’s creative processes. There were quite a few typos too, I have to confess. The eye can lie.

Typing his poems was in many ways very intimate, almost intrusive. I was able to see the twists and turns, the use of ordinary phrases to say extraordinary things, the unabashed repetitions that revealed obsessions. I felt I was getting an inkling of how Eddie’s mind worked, its constant questions, its restless curiosity, its relentless optimism. And maybe that’s enough.

It was an honour to join in the founding of The Edwin Morgan Trust to carry out Eddie’s wishes as set out in his will as best we could and in the hope that my knowledge and experience would be useful in continuing his legacy.