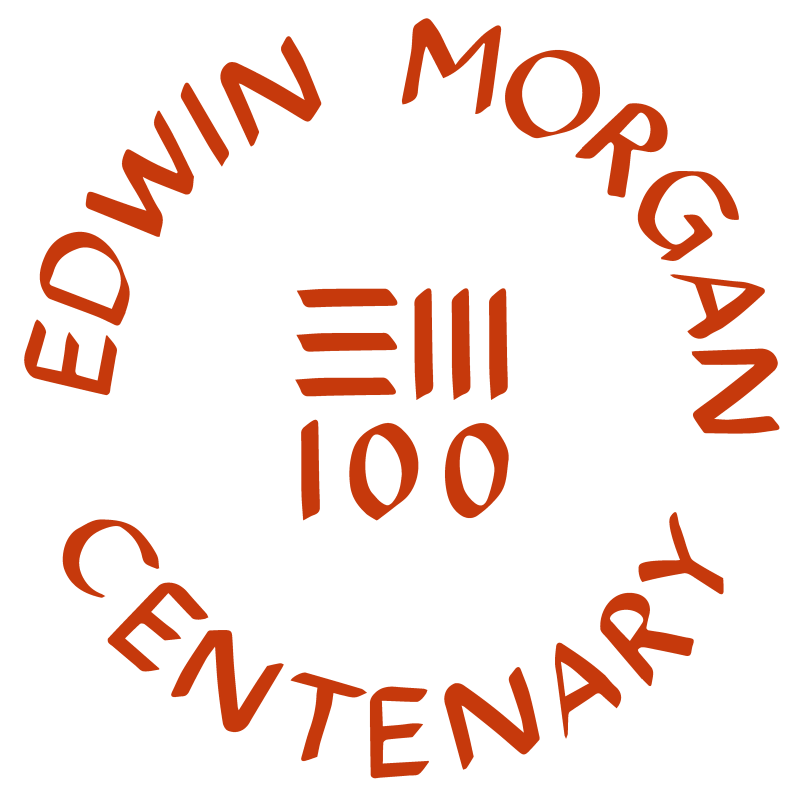 Edwin Morgan’s centenary to be celebrated “from Glasgow to Saturn”

A far-reaching centenary programme presented by the Edwin Morgan Trust and partners celebrates the life of one of Scotland’s most significant poets.

The Edwin Morgan Trust, with exciting key partners, is delighted to announce a centenary celebration of Scotland’s first Makar that stretches “from Glasgow to Saturn”, beginning on what would have been his 100th birthday, 27 April 2020. Edwin Morgan’s poetry and life will inspire a lively, multifaceted celebration that includes workshops, publications, live music, readings, exhibitions, discussions, book festival events and new creative responses.

The Edwin Morgan Trust is following the Covid 19 situation closely. This exciting programme of events and activations will be adapted to meet any recommended health advice to ensure the safety of participants and wider communities. We will continue to update in response to any changes.

Edwin Morgan (1920–2010) led a remarkable creative life. He published 25 collections of poetry, translated hundreds of poems and wrote plays. Glasgow was at the heart of Morgan’s life and work and Scotland was his vital context; but his outlook was always international, even intergalactic. His poetry is extremely accessible, engaging, and often humorous, ranging from social realism (‘In the Snack Bar’) to Dadaist experimentation (‘The Loch Ness Monster’s Song’).

Throughout his life Morgan pushed the boundaries of poetry, for example collaborating with musicians like the indie rock band Idlewild and jazz composer Tommy Smith, and visual artists John Furnival and Ron O’Donnell. Significantly, Morgan lived during a time when homosexuality was a criminal offence (it was de-criminalised on 1 February 1981, when Morgan was 61) – many of his love poems before this time are genderless, and capture the spectrum of experience of love and lust.

THE CELEBRATIONS:  SOME HIGHLIGHTS

The centenary year kicks off on Monday 27th April, Morgan’s 100th birthday, with a nationwide social media sharing of poetry. Alongside some celebrity ambassadors, readers around Scotland, the UK and the world will be encouraged to photograph, quote or film themselves reading their favourite Morgan poem, accompanied by the hashtag #edwinmorgan100.

The National Poetry Library in London are launching a major exhibition, accompanied by a programme of events examining different aspects of Morgan’s work to run throughout the year. Glasgow University will host a major international academic conference on Morgan’s work and legacy; Tron Theatre are producing a new theatrical promenade work inspired by Morgan’s writing; the Scottish National Jazz Orchestra is touring Planet Wave, Morgan’s epic 1997 collaboration with SNJO Director Tommy Smith.  Other large-scale events by partners, including Edinburgh International Book Festival, Aye Write, and the Fruitmarket Gallery, will be announced throughout the year.

A number of exciting new publications will also be available to readers wishing to celebrate the centenary, revisit or discover Morgan’s work. In April, Birlinn will be issuing The EdwinMorgan 20s, a set of five books of twenty poems). Each is introduced by a well-known Morgan fan: Jackie Kay, Liz Lochhead, Ken MacLeod, Michael Rosen and Ali Smith. In August, Carcanet will publish a substantial Centenary Selected Poems, edited by Morgan’s friend and Scottish publisher, Hamish Whyte, whose own memoir of their friendship will be out in November, published by Happenstance. The Association for Scottish Literary Studies will release Edwin Morgan, In Touch With Language, a new collection of Morgan’s prose writings, edited by John Coyle and James McGonigal  in April. Speculative Books will be publishing a Morgan-themed edition for their annual Speculative Book in 2020, teaming up with Colin Herd to commission and edit new works from writers responding to the Edwin Morgan scrapbook collection held at University of Glasgow Library. ÚLTIMA MENSAGEM (Last Message), a Portugese translation of Morgan’s work, was published in February by Lisbon press não (edições).

The EMT is also working with Open Book –the organisation that works across Scotland to provide supported shared reading and creative writing sessions – to make May their Edwin Morgan month, sharing his poetry and providing creative inspiration for groups from Craigmillar to Aberdeen, Kirkwall to Stranraer, Lerwick to HMP Greenock.

“We have selected themes and partners that not only pay tribute to the many facets of Morgan’s life, but also to his motto, “CHANGE RULES!” Unsurprisingly, Edwin Morgan’s poems are as relevant today as they were when he wrote them. We have an exciting opportunity to ensure that a new generation is encountering this dynamic work within both traditional and unexpected settings.”

Morgan’s poetry returns to a Scottish publisher for the centenary: Polygon (an imprint of Birlinn Limited) will publish the Edwin Morgan Twenties in April 2020, in association with Carcanet. Morgan was both a prolific and eclectic writer, whose myriad themes encompassed love, activism, science fiction and more. The Twenties celebrate the diversity of such a loved poet in five slim, brightly-coloured volumes. Each contains a selection of twenty poems on one of his themes and are introduced by prominent authors: Jackie Kay introduces Love; Liz Lochhead, Scotland; Ken Macleod, Space and Spaces; Michael Rosen, Menagerie; and Ali Smith, Take Heart.  The books are available individually (£5) or in a box set (£20 for five).

Academics, writers and publishers from around the world come together in Morgan’s home city to celebrate his life and the wide range of his work.

The GSA Choir is well-known for its commitment to contemporary music, having commissioned over 15 new choral works over the last 7 years. Join the choir as it performs The Unspoken, commissioned from Scottish composer Jay Capperauld in 2017, with lyrics by Edwin Morgan. Morgan’s poem, and Capperauld’s epiccomposition, examines “the joyous emotion of love”.

A wander down dark corridors, up stairwells and into tight spaces … in pursuit of the works of the great Edwin Morgan. A thrilling promenade show around and about the Tron Theatre, where the walls will echo with the voices and sounds of Glasgow’s most famous bard. Devised and orchestrated by Andy Arnold.

Friday 29 May | Planet Wave | Perth Festival of the Arts, Perth

The Scottish National Jazz Orchestratake a trip through time as they perform the colossal Planet Wave, an extraordinary collaboration between Morgan and his long-term collaborator, composer and SNJO Director, Tommy Smith, featuring actor Niall Fulton. First premiered in 1997 at the Cheltenham Jazz Festival, the work matched Morgan’s revelatory poetry to Smith’s powerful music in an epic depiction marking a stage in the history of the Earth.

This event will screen footage from National Library of Scotland’s Moving Image Archive, depicting the changes in Glasgow at a pivotal time in Edwin Morgan’s life. Special guests will discuss Morgan’s poetry and the visions of Glasgow seen in the footage, reflecting on Morgan’s life, work and loves.

Two emerging creatives (curators, writers or artists) will have mentored access to the Edwin Morgan Archives at Glasgow’s Mitchell Library.  This access will be with the intention of mounting a number of displays which will act as ‘alternate’ windows into the archive, finding previously submerged themes and voices and pushing them to the fore. The first display will be installed at Saltire HQ as part of the Edinburgh Fringe programme in August.

COMMENT  Sarah Mason, Director of the Saltire Society, said: “We are delighted to be part of the Edwin Morgan Centenary  celebrations through our Inspiring Scotland programme. Creating opportunities for emerging creatives is at the heart of the Society’s aims; working in partnership with the Edwin Morgan Trust, The Fruitmarket Gallery and Glasgow Life  we very much look forward to seeing the responses to Edwin Morgan’s archive from the recipients.”

COMMENT  Nick Barley, Director of the Edinburgh International Book Festival, said: “Edwin Morgan and his work represent a foundation for much of today’s Scottish literary culture so it’s no surprise that his work has remained an integral part of the Book Festival programme despite his death a decade ago. We mourned his death and celebrated his life, we’ve discovered some truly stellar new poets through the biennial Edwin Morgan Poetry Award. This year we will be building on those foundations by presenting a range of very special events to celebrate his centenary. Full details of the 2020 programme will be announced in June.”

To mark the Edwin Morgan Centenary and the 40 anniversary of the decriminalisation of homosexuality in Scotland, GOMA will continue their Queer Times School Prints project by presenting a one day symposium event in October in association with the Edwin Morgan Trust and the Mitchell Library. The Symposium aims to use Edwin Morgan’s life and archive to pose questions like: how are we challenging narratives and dominant histories by engaging with, or resisting practices of display, collection and archiving? What is it to generate a new work about histories that are entangled, fluid and sometimes hostile within an institutional framework? What is a queer archive? And what can it be?

COMMENT Faclan Director Roddy Murraysaid: “Our programme for the Hebridean Book Festival includes Niall Campbell from South Uist who won the Edwin Morgan Poetry Prize in 2014.  The award further enabled his development as a new poetic voice and illustrates the huge contribution Morgan has made to Scottish culture, nationally, beyond the page. We are delighted to acknowledge and pay tribute in this Centenary year.”

In the centenary of the birth of one of Scotland’s greatest writers, a gathering of poets profoundly influenced by Edwin Morgan’s work will read their favourite Morgan poems and talk about his effect on them and the wider world. They will also read poems of their own which take off from one of Morgan’s many worlds. Chaired by the poet Richard Price, who knew Morgan for over twenty years, this will be an event of poetic exploration and celebration. The intention is to show the range of Morgan’s work and how it has travelled south of the border to inspire a diversity of poets and approaches.

Since October 2016 RSS and Street Level have been experimenting with adapting photography exhibitions as on-screen presentations to be shown before main features on the Screen Machine mobile cinema, which serves over 40 remote and island communities across the Highlands and Islands of Scotland. For the centenary of Edwin Morgan, Street Level Photoworks will produce a short digital film celebrating the multi-faceted contribution Morgan has made across various artforms which will be shown on the mobile cinema from January to March 2021.

In 2021, to intersect with their annual The Artists’ BookMarket and the launch of their expanded new space, the Fruitmarket Gallery will celebrate #edwinmorgan100 with an extensive programme of events and activations. These events will draw from the themes of Morgan’s life that may include zine-making or scrapbooking workshops responding to Morgan’s scrapbooks, live readings and presentations of new works generated over the centenary year, panel conversations responding to some of the issues that arise over the year (such as language and translation, queerness, internationalism, self expression) and live music performances.

Events for the rest of the centenary will be announced throughout the year.

A wealth of archival material is available through the Edwin Morgan Trust – there are excellent resources available for print features and broadcast coverage.

As yet, there is no documentary on Morgan’s life in production to mark his centenary year; EMT would be very keen to assist with this in any way possible, including providing resources and contacting significant possible talking heads.